﻿
Lead time: Ships in 3 - 5 Business Days
Email Friend
Be the first to review this product
Special Price $595.00 Regular Price $1,095.00
In stock
SKU
mf-mid-14-backorder5
Add to Wish List
Skip to the end of the images gallery 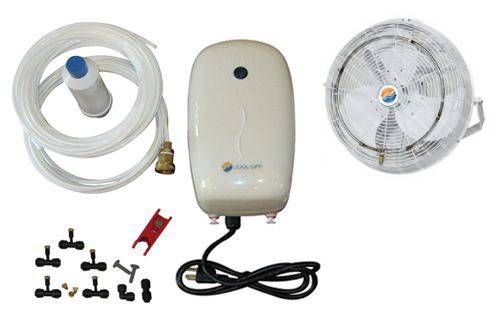 Skip to the beginning of the images gallery
Description
Stay Cool this Summer
Get ready to experience drastic outdoor cooling power with our small and powerful high pressure 14 inch misting fan. Mist fans are used extensively nationwide. They’re used on farms and ranches to help cool down animals. They’re used at resorts and theme parks to keep guests cool and comfortable. 14 inch misting fans cost roughly 80 cents per hour to use. They cool down the home and the exterior of the home better than an air conditioner. You may stop using your air conditioner altogether.

A misting fan operates on the same concept as a high pressure misting system. High pressure misting systems are hoses with built-in tiny holes. A high amount of force is used to push water out of these holes. This results in spray escaping the holes. The spray is comprised of tiny water droplets. These droplets quickly evaporate into the air. When they do, the air is cooled. The cooling phenomenon is similar to the body’s natural reaction to heat. The body sweats in an effort to cool itself down. When sweat evaporates on the skin, it cools the body down. A misting fan and a misting system work from the same concept. As the water droplets evaporate, the air can be cooled down by as much as 30 degrees Fahrenheit.

Other misting systems and misting fans claim to be high pressure, but they do little more than drip all over the floor. A true high pressure mist fan will not make everything around it wet. The air is cooled down, and the fan blows this cool air around the area it is used. Because it does not make everything wet, it can be used indoors as well as outdoors. Some people decide to use it indoors; however, it tends to be used extensively outside.

A misting fan is the perfect addition to any outdoor room or enclosure. Several people have taken to building outdoor kitchens to entertain outside and keep the indoors both cooler and cleaner. However, with use of a misting fan, many people consider having outdoor bedrooms as well.

Misting fans are used extensively for commercial and residential purposes. They are the best way to cool down a home. They’re more effective and more economical than an air conditioner. They work in the humidity, and they work in arid climates, which makes them a smarter alternative to a swamp cooler. They are more effective than fans alone. It’s a surprise they aren’t found everywhere. Once people discover their amazing cooling abilities, they just might pop up everywhere.
The 14” Cool-Breeze Misting Fan Kit includes 3-speed, outdoor rated fans which are extremely quiet and mount virtually anywhere. This Misting Fan Kit features a whisper quiet booster pump and 3-Speed epoxy coated outdoor fan that will blow air 10-15 feet away. When estimating your misting fan requirement plan on (1)14” Misting Fan for every 90 - 120 Sq. Ft.

This Misting Fan Kit is the ultimate way to design a custom system that fit's your lifestyle. The 14” Mid Pressure Misting Fan Kit also allows the end user to incorporate a perimeter misting system as well, which appeals to many homeowners trying to combine a misting system along the perimeter while placing stylish misting fans in the corners. Each one of these kits come with the misting industries newest and exciting 200 PSI booster pump, capable of powering up to (20) .012" misting nozzles. In doing so, we've created the ideal outdoor cooling solution for customers seeking high performance at an affordable price.

Check items to add to the cart or
Copyright © 2022 Cool-Off, LLC. All rights reserved.